A rustic white cedar gazebo is a centerpiece in the heart of the largest remaining stand of native dogwood trees in the region.

Every year, while spring was busy prying away the season from winter’s grasp, my family would make the trek down to Deep Creek, Maryland, to visit my grandparents’ cottage. The drive from our Long Island home was just over seven hours, which, to a kid with very little concept of or care for time, was just short of excruciating. However, somewhere between my merciless seat-kicking and the 28th “are we there yet,” my restlessness slowly changed to anticipation as the highway narrowed and the forest thickened. 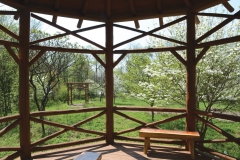 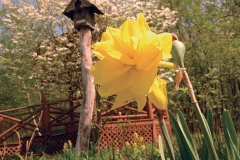 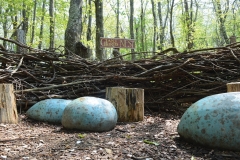 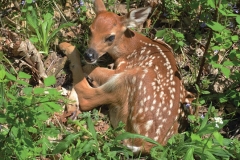 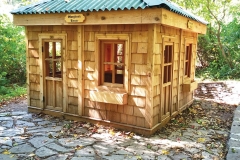 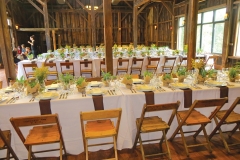 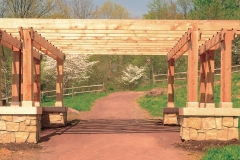 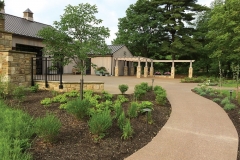 My father would occasionally pull the car off to the side and point out toward the trees: “Look!” We’d clamor to the window as if we were touring Jurassic Park. To me, seeing a deer by chance on a car trip was just short of busting Santa red-handed in my living room. My appreciation for the outdoors was founded on these getaways—chasing chipmunks, spying on hummingbirds, playing in clay embankments and ruining my clothes. Now, decades later, when I glimpse a deer near the road, I say a quiet prayer that it doesn’t decide to ruin my day and insurance premium.

I was pleasantly surprised recently when a similar childlike anticipation crept upon me while navigating a windy back road en route to the Pittsburgh Botanic Garden. Originally formed in 1988 as the Horticultural Society of Western Pennsylvania, the garden has had to overcome its fair share of obstacles and misfortunes prior to the opening of its first completed section in 2014. A 20-minute drive west of downtown, the 460-acre project sneaks up on you fairly quickly off of I-376.

One of, if not the most unique aspects of the garden is the history of the land on which it sits. It’s been home to two brothers, both participants in the Revolutionary War and the Whiskey Rebellion in the late 18th century. Hugh Brackenridge, founder of the Pittsburgh Post-Gazette and what is now the University of Pittsburgh, owned another large portion of the land. It’s been farmed by generation after generation of families, logged in the 1920s, and eventually deep-mined and strip-mined by the Pittsburgh Coal Company (which would later merge with other mining companies to form what we know today as Consol).

The task of cultivating a world-class botanical garden here seems a bit… unconventional. Nevertheless, through the efforts of a passionate staff coupled with the generosity of countless volunteers, a beaten-down, wounded terrain has slowly been healed into a blossoming horticultural sanctuary.

The rich history of the land is evident the moment you pull up: a barn from the 1870s has been pristinely restored as the welcome center, and a similarly refinished 1760 log cabin still stands, built by one of the first documented settlers of the region, 16-year-old Scots-Irish immigrant John Henry.

The scars of the land also are apparent. Along the trails, a keen eye can spot the occasional steel pipe just barely poking through the mulch, or the dilapidated terracotta drainage system that originally was used to remove 10 gallons per minute of aluminum hydroxide byproduct from the abandoned coal mines (commonly known as acid mine drainage). They serve as reminders of the garden’s most pressing obstacle: decades of neglect and disrepair.

When the lease for the land first was signed in 1998, the group had a relative understanding of what they were getting into on paper. Invasive species of plants had laid their claim to much of the territory, the barn and log cabin had been vandalized, and a milky white pond had accumulated 90 years’ worth of mine runoff. As such, a nagging question I had for garden president Greg Nace was a simple one: How was this land in particular, with all of its obvious flaws and deterrents, chosen for this reclamation project? The answer, in retrospect, was just as obvious: “Nobody knew what to do with it.”

The one unpredictable variable was Mother Nature. After gaining significant traction in the restoration effort, the garden was left at a crossroads in 2004 when Hurricane Ivan swooped in with six inches of rainfall, undoing years of hard work and investment in the cleanup. The massive flooding made the task of controlling the acid runoff nearly impossible, and many of the oldest remaining trees were destroyed. With the support of Allegheny County and a construction contractor willing to take on the task, the decision was made to stay the course.

Not so fast. In 2012, the contractor passed away and the company was subsequently sold. And yet through it all, much like the many native trees and plants making their resurgence throughout the garden, the Pittsburgh Botanic Garden adapted. Fast forward to present day and nature is finally beginning to reward the dedication and perseverance demonstrated by staff and volunteers. Forty species of wildflowers have found their way back, and bee hives are being installed to help keep the population thriving. “We wanted this to be a pollinator’s paradise,” says Kitty Vagley, who’s in her fifth year as director of development.

Native trees also have joined the comeback; having been logged in the 1920s, a tree inventory in 2010 revealed only 30 species on site, while the number ideally should be closer to 120. Once decimated by anthracnose three decades ago, the garden now hosts what Vagley describes as “the last large stand of native dogwoods in the entire Pittsburgh region,” currently totaling more than 500. “All planted by Mother Nature.”

A ripple effect has allowed the wildlife of the region to flourish as well. “We know we have rodents, rodents bring snakes, snakes bring hawks and owls—we’ve seen this whole ecosystem reviving itself right in front of our eyes,” comments Vagley while showing me the line of bluebird houses along the trail. In fact, 105 species of birds have been documented, up from a count of 58 in 1998.

Perhaps the most profound transformation comes in the form of the aforementioned drainage pond, or what is now known somewhat miraculously as the Lotus Pond. In 2013, 450 tons of crushed limestone filled a state-of-the art filtration system designed to bring the pond back to appropriate pH levels. In only two days, the pH level rose from 2.9 to 7.1, essentially transforming a pond with the acidity of vinegar into habitable water. It was stocked with almost 500 fish last year, and the filtration system won the 2014 Governor’s Award for Environmental Excellence.

There is still a long road ahead, but the progress over the last few years has been remarkable. The garden held its first wedding this spring, and a number of special events are planned throughout the year. Activities along the trails have been designed specifically with children in mind, and the garden will play host in 2016 to Nature Connects, an increasingly popular touring exhibit of sculptures made out of 1.6 million-plus Lego pieces. You can even get your yoga on, with classes offered twice a month next to the Lotus Pond.

As the victories keep trickling in, Vagley hopes to see more of the species that made such a positive impact in getting the garden to where it is today: Pittsburghers themselves. “The most heart-wrenching part of this job is that our neighbors don’t know we’re here.”

Matthew John Milligan is a freelance writer living in Aspinwall.