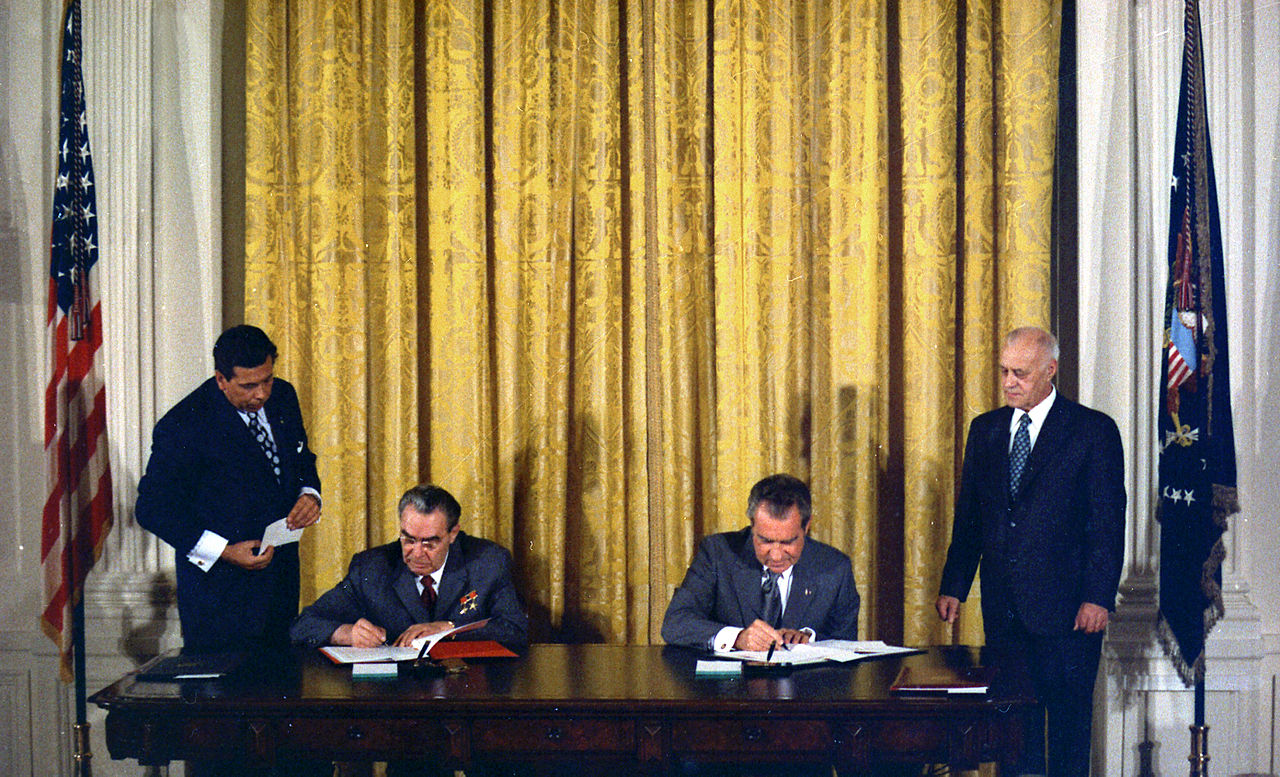 Richard Nixon signing ceremony for the Scientific and Technical Cooperation Agreement in the Field of Peaceful Uses of Atomic Energy-1973. Credit: WikiCommons

Previously in this series: “The Hug that Rocked Indianapolis: Richard Lugar, Part VII”

Richard Lugar wasn’t just the Mayor of Indianapolis and he wasn’t just running for the U.S. Senate – he was also being mooted as President Nixon’s running mate. Lugar was a busy guy.

Everybody knew Lugar was “Richard Nixon’s Favorite Mayor” – which, by the way, was very odd when you consider that two more different men never walked the earth. But the fact that Lugar was under serious consideration for the vice presidential slot was kept under close wraps so as not to infuriate the current VP, Spiro Agnew.

Most people have largely forgotten about Agnew, who had the distinction of being indicted for corruption as a sitting vice president (unrelated, bizarrely, to Watergate). I remember him mainly for his habit of referring to Vietnam War protesters as “nattering nabobs of negativism.”

As Nixon’s first term drew to a close he began to consider whether Agnew might be more of a liability than an asset. The President considered replacing Agnew with John Connelly, then Treasury Secretary, but Connelly was a Democrat and many Republicans were already annoyed that Nixon had put a Democrat in the Treasury slot.

Nixon’s second choice was Dick Lugar. But dumping a guy who’d been VP for four years was no simple matter. What Nixon needed, he told Lugar, was a “spontaneous” groundswell of support for the Mayor from the Republican base. But how to make that happen?

Nixon wasn’t known as “Tricky Dick” for nothing. He decided to give Lugar a plum assignment – the Mayor would give the keynote address at the Republican National Convention, being held that year in Miami (actually, Miami Beach, where my then 12-year-old future wife lived).

Lugar’s speech, according to Nixon’s plot, would galvanize the Republican base and the convention delegates would arise as one and demand that Nixon dump Agnew and substitute Lugar.

But there was a problem with Nixon’s idea – Richard Lugar was one of the worst public speakers in the history of politics. The Mayor spoke like the Oxford don he almost became – as the words came s-l-o-w-l-y out of his mouth you could almost see the complex clauses and sub-clauses, the long paragraphs, the words of five syllables. That is, you could see them if you hadn’t already fallen asleep.

Immediately, Lugar’s staff stopped worrying about the city of Indianapolis and the U.S. Senate and spent all their time worrying about how to draft the best keynote address in history and – even more difficult – teaching the Mayor how to give the speech.

That is, most of the Mayor’s staff turned their attention to these things. I was left out of it altogether and I wasn’t happy about it. After all, in my own mind I was the best writer on the staff. If they turned me loose I’d write a speech that would have the convention delegates leaping up on their chairs and screaming “Lugar for Veep! Lugar for Veep!”

But no one else seemed to think so. I got more and more frustrated as rumors abounded that the speechwriting wasn’t going all that well. Finally, I asked a secretary – I knew she was sweet on me – to sneak me a peek at the current draft of the keynote.

She demurred coyly, saying she could get in big trouble. But one day soon thereafter I arrived at my office to find, turned upside down on my desk, the current draft of the keynote address with a note on it saying, “You owe me!”

The speech wasn’t actually as bad as I’d feared, but it was boring, boring, boring, a bunch of stuff about America’s role in the broader world, about which most Republican delegates cared very little. In fact, the more I read the draft the more annoyed I got, and finally I tore the thing up and threw the pieces in the general direction of my trashcan, uttering an unprintable ejaculation as I did so.

“Now what?” said a voice behind me.

I turned to find “the Pol” standing in my doorway. That wasn’t his name, of course, but it was how I thought of him. He was a very senior Republican operative and kingmaker who had some sort of poorly defined job in the Lugar administration, but whose real role was to get Republicans elected.

Caught more or less red-handed, I stared wide-eyed at him, blushing profusely. He glanced at the pieces of paper on the floor, raised his eyebrows and said, “Been reading the Mayor’s keynote?”

For some reason the Pol had always called me “High-Ree.” I had no idea why – did he have “high regard” for me? That was ludicrous. The Pol was a very senior, very sophisticated political operative, a master of smoky, backroom horse-trading, while I was a complete naïf.

But then one day, as I was walking away from the Pol after a brief conversation, the guy standing next to him said, “Who’s the kid? “Oh,” said the Pol, “that’s the Mayor’s latest hiree.”

Anyway, I agreed that the draft of the speech wasn’t very good.

“You think you could do better?”

“With my eyes closed and my brains tied behind my back.”

The Pol chuckled. “Okay, High-Ree,” he said. “Give it your best shot and then call me.”

By the next afternoon my draft was finished and I called the Pol. When he arrived I handed him the draft and he didn’t even bother to sit down, just stood there and read it through. Then he looked up at me – and burst out laughing.

“What’s so funny?” I demanded.

“Nobody who was ever elected to public office would make a speech like this. Don’t you know anything about politics?”

The Pol tossed the draft on my desk, said, “Except for that, it’s not half bad!” and went off chuckling to himself.

I assumed that was the end of my brief political speechwriting career, but I was wrong, as we’ll see next week.

Next up: Richard Lugar, Part IX