Looking for Answers in the Past to Blunt Pandemic Job Losses

CCC workmen in one of the rock quarries at Laurel Hill State Park. 1938.

At the entrance of Laurel Hill State Park, a bronze statue of a strapping young worker pays homage to the men who built the verdant park with a lake in Somerset County as part of a federal Citizen Conservation Corps created to ease the pain of crippling job losses during the Great Depression. 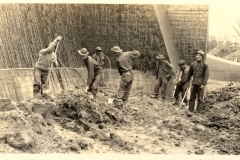 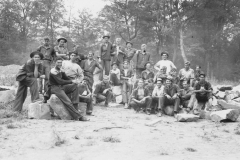 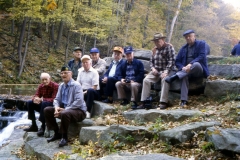 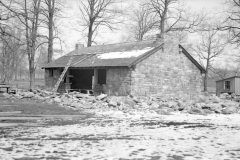 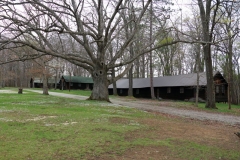 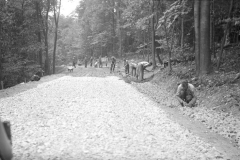 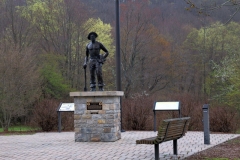 Almost 90 years later, the notion of such large government jobs programs is being revived in the region, state and nation as the coronavirus pandemic claims tens of millions of American jobs and raises concern of chronically high unemployment for years to come.

“A descendent of the civilian conservation corps from the depression is a natural idea,” said Martha Ross, a fellow at the Metropolitan Policy Program at the Brookings Institution. “We don’t know when the private sector is going to start hiring again.”

In 1933, newly sworn-in President Franklin Delano Roosevelt sent a letter asking Congress to create the Civilian Conservation Corps as a way of providing millions of jobs conserving parks and forests to a Depression-ravaged nation staring at 25 percent unemployment, widespread hunger and homelessness.

“I call your attention to the fact that this type of work is of definite, practical value, not only through the prevention of great present financial loss,” he wrote. “It will conserve our precious natural resources. It will pay dividends to the present and future generations. It will make improvements in national and state domains which have been largely forgotten in the past few years of industrial development.”

From 1933–1942, some three million Americans were employed with the CCC. They built or rehabilitated 800 state parks nationwide. Pennsylvania had 151 CCC camps, the second highest number after California. And the contributions made by the 194,500 Pennsylvania CCC workers continue to enrich the region and state.

In southwestern Pennsylvania, they built Laurel Hill, Blue Knob and Linn Run State Parks. Across the state, they made improvements to dozens of others, including constructing 130 new buildings and other infrastructure, and replenishing Pennsylvania’s once-clear cut forests by planting 60 million trees.

The CCC was a precursor to another, larger Depression-era jobs program, the Works Progress Administration, which from 1935–1945 put 3.3 million unemployed Americans to work in the arts and on broad infrastructure projects ranging from roads, bridges and schools to libraries, hospitals, museums and botanical gardens, most of which are still used today.

The jobs created by the jobs program brought much needed relief to millions of American households whose bread-winners were displaced by the depression. But the need was especially acute in Pennsylvania.

Today, the coronavirus pandemic is driving jobless rates to levels not seen since the depths of the Depression in the southwestern Pennsylvania and across the country.

The region’s leisure and hospitality sector has already taken a significant hit. In May, the sector lost 47.7 percent of its jobs from the same time last year. Jobs in education and health services were down 14.9 percent over the year. The transportation and utilities sector declined 15.7 percent.

How long the pandemic will last and how deeply it will impact the local and nation economies is unclear. But health experts warn that social distancing and other restrictions that disrupt the economy will likely be needed to contain the spread of the virus until a vaccine can be produced and widely distributed.

Beyond severe short-term pain, many economists are already warning that the upheaval of the pandemic will permanently destroy some jobs in many sectors. “There have been thousands of articles written about what’s coming our way, and what we’re seeing now will only send [these trends] up,” said Laurence Ales, associate professor of economics at Carnegie Mellon University Tepper School of Business.

The pandemic has accelerated trends that were already erasing jobs from the workforce, such as the rise of artificial intelligence, increased automation, and remote working, learning and entertainment. For many millions of workers in the nation’s theaters, office buildings and schools, there may not be jobs to return to once the virus in under control.

“I think there will be impacts from this long into the future no matter what,” said Christopher Briem, regional economist with the University of Pittsburgh Center for Social and Urban Research. “We’re seeing some fundamental shifts in a lot of industries that people are only beginning to get their heads around.”

At the same time, there is no shortage of work that needs to be done in many of the states and regions confronting significant job losses.

Rising coronavirus cases are spiking demand for public health workers to test for, trace and contain the virus over the next year. In Pennsylvania, the state Department of Conservation and Natural Resource is faced with an estimated $1 billion backlog of maintenance projects in state parks and forests, according to a recent report.

The pandemic has led to talk across the political spectrum about possibly resurrecting the models of Depression-era job programs, such as the CCC and the WPA.

“Looking at the depression era, there were so many opportunities that were built,” said Ilyssa Manspeizer, executive director of the environmental management and workforce development nonprofit Landforce, based in Homewood. “There’s a lot of different areas that could benefit, including conservation.”

“There’s a long history of partnering between Pittsburgh environmental organizations,” she said. “I don’t know that any one organization could scale up completely to meet all of the needs [in the region], but I suspect that between us we could.”

There are challenges. “In order to fund it appropriately we need federal resources,” she said. “But in order to lead the efforts appropriately, we need the local experts.”

The notion of a New Deal-inspired jobs program is directly referenced in the text of the Green New Deal proposed by U.S. House Democrats last year, and the idea has gained traction as pandemic-related job losses mount. In Alaska, the City and Borough of Juneau is using $1 million in federal pandemic relief for a program putting residents to work maintaining local trails. In Utah, Republican Governor Gary Herbert’s reopening task force referenced the CCC in its recovery plan, which calls for hiring unemployed residents for large scale public works programs.

In Pennsylvania, Governor Tom Wolf outlined plans in May for creating a Commonwealth Civilian Coronavirus Corps, a jobs program to put people to work assisting public health officials with contact tracing and testing for the coronavirus.

Allegheny County Executive Rich Fitzgerald said he “strongly supports” the governor’s proposal, which could be particularly helpful for counties that lack the kind of robust public health department found in Allegheny County.

If funding were available to scale the program beyond just containing the pandemic itself, he said, it could also address critical local needs, such as landslide remediation projects and upgrading the region’s aged infrastructure. “There’s a need. I also think there’s a broad level of political support for that as well.”

In the past month, bills have been introduced Congress that would steer billions of dollars toward investments in pandemic response programs, improving the nations transport infrastructure, increasing internet connectivity in rural areas and other projects.

U.S. Representative Mike Doyle (D-Allegheny) said that rather than creating an entirely new organization, Democrats in the house hope to spur job creation through investments in pre-existing initiatives and agencies. “I don’t know that its necessarily going to be a CCC-like program, but when you think of a massive and comprehensive infrastructure package, it’s going to put a lot of people to work.”

Ross, of Brookings, studies large-scale, national jobs programs and said the proposals debated are insufficient. “Something that covers even a couple hundred thousand people across the country is not enough. Tens of millions of people have been affected. We have to be willing to change our frame of reference away from what have been, historically, underfunded and underdeveloped employment programs.”

Even then, she said, the damage of the pandemic recession could be too great for jobs programs to spare everyone. “If we can get up to say two or five million workers, which is so much bigger than anything we’ve done before, that still leaves a lot of people who lost their jobs.”

Roosevelt admitted as much in 1933, telling Congress that his Civilian Conservation Corps would only be one part of a much larger and longer recovery. “It is not a panacea for all the unemployment,” he wrote, “but it is an essential step in this emergency.”