Home is Where the Hearth Is

Apron-clad Beverly Cline mixes some apple pudding — guests will eventually eat it with their fingers.

The walk was maybe a half-mile switchback up the side of a mountain in semi-freezing drizzle, past a slate-colored pond, through a covered bridge, beyond a clearing with a few austere frame buildings, and up and up. 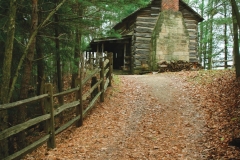 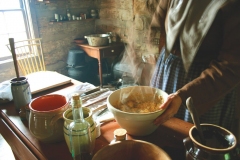 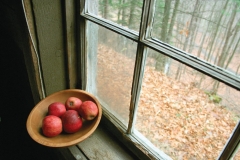 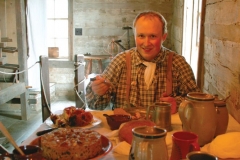 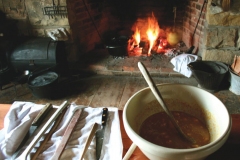 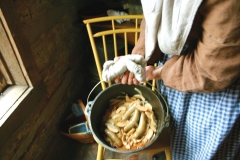 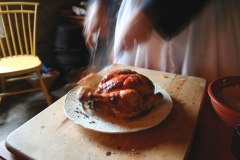 I can tell you I’ve never been so happy in my life to see smoke from a chimney.

The chimney belongs to Hamilton House, part of the Meadowcroft Village Museum of Rural Life. The village, 45 minutes southwest of Pittsburgh, a few miles from a dot of a town called Avella, is a living museum where costumed interpreters show visitors how Western Pennsylvania settlers wrested food and shelter from these Western Pennsylvania hills 150 to 200 years ago. It operates in association with Pittsburgh’s Heinz Regional History Center.

I am here for a lesson in 19th-century hearth cooking.

Frankly, the tiny one-room log cabin, perched on the edge of a steep ravine, makes my heart ache for our Western Pennsylvania forebears.

The isolated setting, unsettlingly quiet, has cut me off from my own life, as credibly as if I had been kidnapped.

That is until a welcoming voice rings through the chill.

Apron-clad Beverly Cline, 54, ushers me in to see the five-foot hearth, briskly ablaze and fragrantly multitasking.

If aprons could talk.

Hers is no frippery. It is sturdy checked linen, generously broad and ankle-length— as expressive as a coonskin cap and a lot more useful in homestead life.

She would never go without it except for church. It shields her body from the fire’s heat, preserves her modesty when her skirts are pinned back to keep them clean. It makes a carrier, corners grasped, for eggs or kindling. Rolled, it keeps her hands warm. It can be a stern flapper should chickens approach the kitchen door. And now, fluttered toward a visitor, it is a gentle wafter, as in “Do you smell that?”

Apples, onions and sausages meld sweetly in a black Dutch oven on the coals. A chicken, trussed tight and suspended from a length of twine is “string-roasting.” Already golden from an initial searing close over its own heap of coals, it has been raised, where it twists and sputters, roasting in side heat from the flames.

Other things can be cooked on a string. The French are famous for gigot à la ficelle, leg of lamb. Bev likes to do venison tenderloin, spinach-stuffed and larded with bacon.

In her muslin cap, Bev may appear mild, but she speaks the language of fire.

She manipulates flames, coals and ash to sear, roast, bake, sauté and boil. She is a connoisseur of firewood and is thrilled with the “beautiful coals” this walnut is making for her today. She shovels embers under and even on top of Dutch ovens, tests temperature with a wave of her hand, adjusts kettles on S-hooks and cranes, shakes a long-legged spider skillet standing in the embers, all the while maintaining a seemingly effortless tutorial.

Enriching the mix today is her daughter Emily Cline, 26, with a master’s degree in early American culture, from the University of Delaware in conjunction with the prestigious Winterthur Museum. The women are walking encyclopedias and their side lectures would give anyone a voracious appetite for history, to say nothing of the food to come.

Lending a personal note are family roots to rural farm life in this remote corner. The museum lies less than an hour southwest of Pittsburgh, just a short spit from West Virginia. The Clines live on inherited farmland in nearby Cross Creek.

“Emily was born immersed in history,” Bev says. “She’s been volunteering at Meadowcroft since her early teens.”

Emily stitches costumes by hand for high-profile living museums, like the clothes she and her mother are wearing today. She has hurriedly machine-stitched trousers and a shirt for history buff Paul Stritzinger, called in at the last minute for our photo as an “eater.” Paul, 25, is an engineer and a fourth-generation farmer, raising grass-fed beef not far off.

“Emily is a bit obsessive on clothing in particular,” says her mother. An Internet search, Emily says, led her to authentic linen in California. She lifts her hem to show four substantial petticoats, cream, checked, brown and blue. Her navy blouse overlaps to one side where it is fastened with straight pins.

No buttons? “Women’s bodies expand and contract through life. Petticoats have ties for this reason too.”

Stays, laced over a shift, hourglass their figures attractively. “The sick or elderly could leave off the stays,” Emily explains. She shows wooly cotton thigh-highs (How do they stay up?) beneath all her layers. Now I see why Bev and Emily do not seem as cold as I am.

Paul is lucky at least that 19th-century shirttails were cut extralong for tucking in around a man’s legs, like underwear — sometimes in lieu of underwear, Emily explains. He’s luckier to be assigned to monitor the hearth, keeping the coals raked to the front and the kettle boiling.

The windows are small and do little to light the room. Bev almost needs a candle to see into her pots. Whole wheat bread is baking in a cast-iron Dutch oven with an ember-laden lid. With a long-handled “lifter,” she pries up the lid, taking care not to dump embers onto the bread.

The hearth is the only warmth. A step away from the fire we can see each other’s breath. My nose hasn’t stopped running.

“Balancing historical accuracy is always the challenge,” Bev says. “We like to glamorize our past. We can never get fully back.”

At a Colonial Williamsburg project mother and daughter were disappointed when the Williamsburg management blacklisted rabbit, due to “visitors’ sensibilities.” Some of the Cline family have vetoed Bev’s squirrel soup.

Today we will encounter neither, but we will have the equivalent of a frontier chef’s tasting menu, the likes of which, Bev stresses, would never have been served in this house on one day, let alone in one meal.

Chicken would have been saved for the parson. They’d have killed an extra rooster, if they had one, Emily says. Eggs were too valuable to the family’s diet and income to sacrifice a good layer. Frontier fowl were smaller: “scraggly old birds, compared to today’s 2 1/2-pound injected fryers.”

“There would have been lots of one-pot meals, lots of monotony. A couple of months, say, of nothing but boiled turnips and pickled beef.”

Eating was seasonal. Preservation was all: Pork and beef slaughtered in late December was salted, cured or pickled. Game provided variation. Cabbage was salted for sauerkraut. Ham and bacon was hung in the chimney to smoke.

A slatted drying rack, an original of which hangs above this hearth, safeguarded dried herbs, corn, mushrooms and beans.

• Breakfast was a “gruel,” or porridge, of oats with milk, and perhaps with buttered toast.

• Noon was “dinner” with meat if there was any, salted ham, or pickled pork, in a “pottage” or stew thickened with stale breadcrumbs.

• Supper might be toast and cheese or boiled pudding.

• Boiled pudding, in the right hands, becomes a lightsome thing.

“I can’t reiterate enough: nobody had recipes. You learned by practice.”

Homestead cooking used “a lot of butter.” (A two-pound pat of butter Bev churned from a half gallon of cream awaits the baking bread.)

She flourishes her “pudding cloth.” It is a two-foot muslin square that is “washed by hand, in water only, never with soap.” Every cook treasured a similar cloth, never allowing it to be in contact with harsh lye and tallow soap of the day.

Bev wets the cloth, flours it, lines an earthenware bowl with it and dumps in the batter. She twists the cloth at the top, ties it with twine and holds it up. “The batter is the right thickness when it drips a little.”

She drops the bundle into a hissing kettle of boiling water.

Sauted cucumbers will be another surprise hit of the day. Cucumber rounds, dusted with flour, are sizzling in butter in the spider skillet.

Pudding and chicken cook about an hour and a half. Frontier folks liked much redder chicken: advice of the day suggested 15 minutes in a hot fire for a small bird.

Paul gets to eat first—while he is being photographed.

The photographer and I rejoice that no one is pointing a lens at us. Forks being few, we tear at chicken with our fingers, stuff crispy cucumber into our mouths,

splattering its divinely vinegary sauce. We blow on chunks of the sausage/apple stew, lick at butter dripping from steaming bread.

Bev offers us a brandied cherry, which melts a path to our stomachs, warming the way for her masterpiece.

She pulls her pudding from the water, gives it a thump, and pronounces it done. Looking for all the world like a round loaf of bread, it is unmolded onto a lovely 19th-century ironstone dish Emily found in Washington, Pa., for 50 cents. We spoon some onto a shared plate. “Wait,” Bev says. She retrieves a saucepan of steaming butter rum sauce from the fireplace. It is more rum than butter we find to our satisfaction. We feed ourselves ineffably light apple pudding with our fingers.

It’s a drunken moment, but not from the alcohol.

“This kind of cooking and eating builds a better appetite,” Emily says. “People really connect through food and clothing.

“I fully intend to have a hearth in my house and to cook for all 32 of my family.”

Adopt us, we signal.

Virginia writes for newspapers and magazines about food. She translated the cookbooks of French pastry chef Christine Ferber, made popular in this country by Martha Stewart. She is active with Slow Food, an international organization working through agro-ecology for a better food supply and to restore the ceremony of the table. She was founding editor of Mt. Lebanon Magazine.