In late August 2018, Pittsburgh Mayor Bill peduto looked at his calendar and was pleased to notice a rarity—a nine-day break without a scheduled public appearance. He celebrated his unusually long vacation in an unusual way. 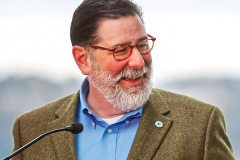 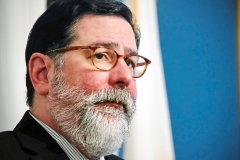 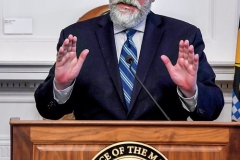 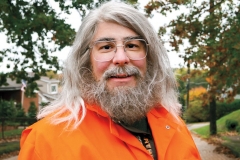 “I didn’t shave during those nine days,” he recalls.“ I made a conscious decision that I wouldn’t go anywhere during those nine days where the beard could be seen. The next time I would be in public would be the Labor Day Parade. So I figured that morning, I would decide: shave it or keep it.”
As luck would have it, he overslept on Labor Day and had no time to shave, even if he’d wanted to. When he arrived at the event, a number of people complimented him on his nascent beard, contributing to his decision to keep it.

Now, the Mayor’s Beard, a grayish-whitish full-length affair, has become something of the mayoral signature. Ask constituents about his legislative or economic development agenda—expansion of bike lanes, the roller coaster ride with Uber, the unsuccessful courtship of Amazon HQ2—and you may get a shrug or a quizzical look. Ask them about the Mayor’s Beard and you’ll get an earful—it’s too long, it’s too gray, it doesn’t match his brown hair.

“He looks very distinguished, like someone from the turn of the century or the 1870s.
I picture him in a military uniform, maybe from the Civil War. It’s a very good
look for him.”
—Tom Murphy, mayor, City of Pittsburgh, 1994-2006

Moreover, the Mayor’s Beard snaps a century-long streak of clean-shaven Pittsburgh mayors while signaling to other elected officials that facial hair may not be a campaign killer after all.

Like it or not, the Mayor’s Beard may be here to stay.

Beards long have been a symbol of masculinity, strength and personal style. Until advances in the art made shaving less painful and haphazard, many elected officials favored facial hair that spanned a wild gamut—full beards, brushes, goatees, chin curtains (a la Abraham Lincoln), handlebar mustaches, sprawling mutton chops, tightly trimmed Van Dykes. Yet before Peduto, the last Pittsburgh mayor to wear any kind of facial hair—a mustache, in this case—was George Guthrie, who served from 1906 to 1909.

If there was any hope that beards among public figures might make a quick comeback, it probably was quashed by Fidel Castro when he pointed Soviet missiles at the U.S.—and his malevolent-looking beard at America’s cultural norms. A Cold War-era elected official with a beard risked being branded a communist sympathizer or worse.

Local elected officials over the last few decades have had little use for beards.

“I never considered growing a beard while I was in office. It would have been inconsistent with my motto: ‘Clean living, clean shaven and a pure heart,’” says Jim Roddey, former Allegheny County executive, possibly with tongue in cheek.

Tom Murphy, who served for 13 years as a state legislator and another 12 as Pittsburgh mayor, also eschewed facial hair.

“If I don’t shave for three days, my face starts to itch,” Murphy confides. “The other thing is that grooming a beard becomes work. It’s easier for me to shave every morning.”

Yet beards generally are back in vogue. Data offered by History Cooperative indicate that about one-third of American males wear facial hair, a resurgence not lost on elected officials and candidates for office. You realized that if you watched the January inauguration of Gov. Tom Wolf and Lt. Gov. John Fetterman. In Harrisburg now, the Commonwealth may boast the most powerful bearded duo since the Smith Bros.

“Ho ho ho, he didn’t stop at my house this year—and I had cookies and milk out too.”
—Darlene Harris, District 1 councilwoman, City of Pittsburgh

Although the Mayor’s Beard may seem a departure to many, it’s actually the sixth beard he’s grown. He had a short one when, as a young man, he applied for a position as regional director for a political organization. After tortured soul-searching, he shaved the beard the night before his interview so he would make the best impression.

“I went into the interview,” he says, “and the person interviewing me had a beard.”

That taught him to follow his instincts. Indeed, the 2008 version of the Mayor’s Beard was much more ambitious.

He even consulted experts at Carnegie Mellon University to help him design a uniform to match the get-up he saw in a picture of the czar. How wise it is to model yourself after a guy who was overthrown and executed is open to debate, but the resemblance was striking. A photo of Peduto as Czar Nicholas II hangs in a conference room in the mayoral suite.

Some men wear beards to avoid the drudgery of shaving, but Peduto notes that beards are ineffective from an efficiency standpoint.

“You may think you’ll save that five minutes every morning, but you pay for it on the back end,” he says.

“A short, neatly trimmed beard is generally accepted favorably by the public. On the other hand, the mayor’s beard can best be described in verse: ‘So now the mayor wants to ask—how do you like my beard? And the best response I know is that it’s really weird.’”

With each new beard, he’s acquired more grooming tools—“hairaphernalia,” if you will. Every Sunday evening as he trims his beard with an electric razor; he uses a plastic apparatus that helps him stroke perfect lines. Each morning, he applies balm to keep his beard soft. Recently, he began deploying mustache wax.

“When it’s at the point where the mustache has not been trimmed back, I can actually have it going straight up.”

It’s a laborious process, though, and Peduto says he’s bringing in reinforcements.

“It’s ready now for someone who’s a pro.”

Everyone has an opinion about the Mayor’s Beard; the intensity of public reaction has surprised him.

“I don’t have any reason to believe that anybody who supported me politically all of a sudden doesn’t support me because there are follicles on my face,” he says. “But I do know that those who didn’t like me previously really take exception to the beard.

“Even the harshest criticism that comes in, for the most part, has a certain whimsical factor instead of a pure political bent. Someone on Twitter told me to shave it. I said, ‘I can’t. I finally found something more controversial than bike lanes.’ ”

Many critics take aim at the gray-white color of the Mayor’s Beard, a sharp contrast with his rich brown hair. This, conspiracy theorists insist, is a sure sign that the mayor is surreptitiously dying his hair. Counters Peduto:

“Ten years ago, my beard was more pepper than salt, but there were definitely traces of gray hairs coming in. It’s just a Peduto trait. For whatever reason, the Pedutos are two-tone. People say, that’s because you dye your hair. I’m 200 percent Italian—100 percent on each side—and my hair is something that was given to me. I wouldn’t even know how to start to dye hair.”

How long will the Mayor’s Beard last? When it was such a hit at the Labor Day Parade, Peduto thought he would retain his beard until Christmas. Now, another self-imposed deadline looms for the mayor, a die-hard Penguins fan.

“When Christmas passed, I thought I would keep it through the Penguins’ season because if I shave it and they lose in the playoffs, people would say they lost because I shaved. And somebody would blame me.”

Don’t be surprised, though, if that deadline comes and goes as well. The fact of the matter is that, at age 54, William Mark Peduto has found his look.

“I like it,” he says. “I know a lot of people don’t like it, but if that’s one of the big negatives, I can live with that. I feel it’s my style. I do listen to the criticism, but at the same time, I’m in no hurry to shave it. I would shave it only if it created controversy that takes away from doing the job. If that’s minimal, there really is no reason to shave it. I’m still open to the idea that this could be on my face next year.”

What tonsorial professionals are saying about the Mayor’s beard

“The color is at odds with his dark hair. In this business, we have what we call highlights and lowlights; lowlights are darker than the base color. If the mayor were in my chair, I’d advise him to add brown lowlights to his beard.” —Margie Campbell, hairdresser at Flair, Greenfield

“Maybe we don’t pay him enough because it looks to me like he’s homeless. It’s possible he needs a beard that long to cover up holes in it, but I would cut it a lot shorter for him. It’s just too scraggly.” —Larry Caddy, retired proprietor of the Point Breeze salon Caddy Shack

#1: Beard historians tell us that during the Middle Ages, no man touched another man’s beard lest such an offense provoke a duel.

#2: According to ThoughtCo, Benjamin Harrison, who served from 1889–1893, was the last U.S. president to wear a full beard. William Howard Taft, in office from 1909–1913, was the last president with facial hair while Charles Evans Hughes was the last bearded major-party presidential nominee. The Republican standard-bearer lost—by a mere whisker—to incumbent Woodrow Wilson in 1916.

#3: Vox reports that in 2015, in the United States Senate­—a male-dominated institution to be sure—not a single member wore a beard, and only two flashed ‘staches. However, before his retirement that year, U.S. Sen. Tom Coburn, R-OK, sometimes sported a beard that had its own Twitter account.

Pittsburgh Mayor: Who is Bill Peduto?