Joseph Meyer and his dog Bo can be seen together most days as Meyer works to restore the once abandoned town of Yellow Dog. Meyer bought the old mining village in 2014 and is working to create a living history museum, somewhere for people to vacation and to have experiences with village craftsmen.

Joseph Meyer lives in the former manager’s home of an abandoned company town, where there is no running water, no cell service, and until recently, there was not a single resident. On this cold Saturday in December, 63-year-old Meyer splits wood to heat his three-story home. The scene would be a common one in rural Pennsylvania, but the setting is far from ordinary. 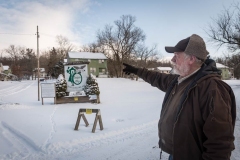 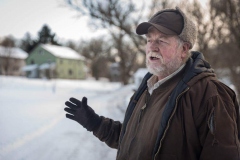 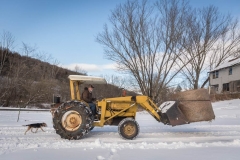 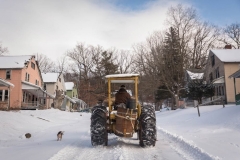 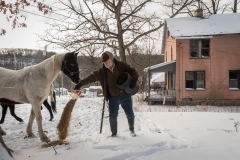 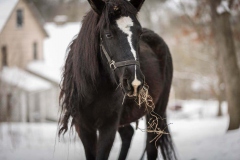 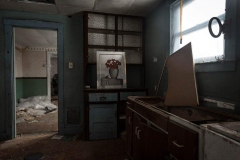 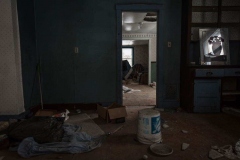 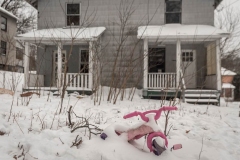 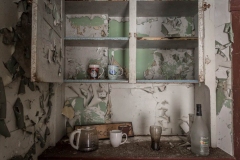 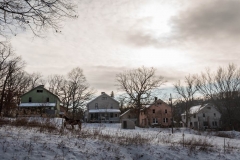 Eight years ago, the town— once known as Yellow Dog Village— was abruptly abandoned. Residents were forced to leave due to unsafe drinking water. Some took their possessions, clearing homes of any personal artifacts save wallpaper, carpet, and paint. Others fled with more haste, leaving furniture, books, and even family photo albums.

Before long, abandonment begat vandals, which hastened the decline of village structures. Windows were broken, roofs began to leak, and as nature crept in, the buildings succumbed to the elements— paint peeled off walls, moss grew on shingles, and things took a rapid turn for the worse.

But when Meyer, a former history teacher, saw the village listed for sale, he saw opportunity, warts and all. “I want to preserve the village,” he says. And in order to do that, he bought the entire town, for $220,000 in 2014.

From his porch Meyer can survey the community— 40-some residences, a carriage stable, and a former chapel— all of which would be destined for certain destruction but for his intervention.

Although the setting offers plenty of solitude and quiet, Meyer didn’t move here to be alone. He plans to transform the village into a living history museum, with yearround residents and craftsmen, immersing visitors in the life of a small, rural village of 100 years ago.

Yellow Dog Village is located in West Franklin, Armstrong County and was built in the early 1900s by the owners of a limestone mine as company housing for its workers. The homes are situated on the slope of a hill overlooking Buffalo Creek, a tributary of the Allegheny River.

A century ago, residents would have looked out from front porches and kitchen windows to see their worksites across the valley. Today, Joseph Meyer points to the various mine entrances. “They connected these caverns, eventually, underground,” Meyer says. “Back then they didn’t have big machinery; it was all pulled out by hand, like the coal mines were.” The limestone was shipped out of the valley on rail cars for use in construction and in the steel industry.

Yellow Dog was a moniker bestowed upon the village likely due to the the residents’ union status. In his book, “The Laws that Shaped America,” author Dennis Johnson writes that the “yellow-dog contract [was] an agreement between the worker and employer, written by the employer, stating that the worker did not at that time belong to, nor would attempt to join, a union.”

Thus, living in company housing, “The people here, they were accused of being yellow doggers, like an insult, because they had agreed not to unionize,” Meyer says. “So they took that yellow dog like a badge, they were proud of it. So they always called this Yellow Dog.”

By the 1950s, after the mine closed and ownership had switched hands, the community was renamed Shadyside Village. By most accounts it was a good place to live, and the houses— a mix of duplexes and single family homes— would remain occupied though the turn of the century.

But eight years ago, residents started to get sick. In 2009, the Pittsburgh Tribune-Review reported that water samples tested positive for eColi, likely from a failing septic system. When the village’s then-owner, KH Real Estate, did not find a solution to the contaminated water system, residents were forced to leave.

“The village went down because of water,” Meyer says. “Once the water was cut, the village was done.”

Meyer was raised in Bethel Township, in Berks County. He lived most of his life in eastern Pennsylvania, where he worked variously as a history teacher, a dairy farmer, and a horse breeder. But it was working as farm and garden manager at the Landis Valley Village and Farm Museum in Lancaster that most prepared him for his current undertaking.

At Landis Valley, Meyer was tasked with operating a holistic farm program. But he felt restricted there, working for the state and within the museum’s parameters. The freedom that a privately run village could afford—such as Yellow Dog— was a dream.

But if freedom is Yellow Dog’s positive, it’s negative is financing.

To save the homes of Yellow Dog, Meyer needs to replace or repair their failing roofs, and he needs to do it sooner rather than later. Water, the village’s initial undoing, now threatens to destroy the historic buildings.

In lieu of traditional financing— banks have been reluctant to support Meyer’s vision— Meyer hopes that if he fills the empty homes with people first, the roofs will follow.

Yellow Dog might not be the village it once was, but it’s no longer a ghost town. Meyer has neighbors.

He wants half the village to be occupied by traditional tradesmen and craftspeople, and four houses, in addition to his own, are now occupied. Through word-of-mouth advertising (and even direct solicitation), he has found a fiber artist, a potter, an antique photographer, and a general handyman. His daughter, Amber Glaslow, 25, also lives in the village and runs a horse stable.

Instead of paying rent, residents provide one day of labor a week in the village, such as clearing trees and brush, and repairing homes. The other six days are their own. The idea is that when the village opens to the public, the craftspeople will be able to offer workshops and products for sale. But the village is no commune. “They can set their home up however they please,” Meyer says. “I tell them that if they can live here under these conditions, and run a successful business… I hope they get rich.”

There’s still no running water at Yellow Dog, but Meyer fills tanks for his tenants with water from a spring. Electricity is optional, with some choosing to live without, and heat comes from the village’s abundant supply of wood, or kerosene and propane heaters.

Karen Fry, a fiber artist whose focus is traditional weaving, is one of the new villagers. For the time being, she’s living without electricity, running water and central heat. “It’s like camping,” she says. “I’m going to bed with the sun, and waking up with the sun.”

Meyer says the homes are well built. “There’s basic frame fitting,” he says, “not just stick frame hammered together. And a lot of hardwoods were used, not just pine. So they’re substantial, they’re solid. The plaster work is amazing, and we’re not going to tear it out. Plaster will last for hundreds of years —just take care of it.”

But the clock is ticking, and no matter how well built, these homes won’t last long if their roofs aren’t repaired.

Meyer hopes to open to the public this spring, for vacation stays, and for experiences with the village craftsmen. But after three years the majority of Yellow Dog’s homes are still vacant. The village is still in need of capable gardeners, leatherworkers, and blacksmiths, among others.

For now, the village is filled with horses. When not in their stable, they graze on the grasses that grow between houses and in the middle of crumbling roads.

But Fry, the village fiber artist, says there’s an energy in the former mining town. “It’s very peaceful. It’s kind of becoming its own little community. I like sitting out in the evening, on the steps and watching the fireflies and the animals. I wake up to the rooster crowing. It’s not a way of life for everybody; it’s different. But I enjoy it. I feel a sense of peace there.”

Andrew Moore is a freelance writer living in Manchester, Pittsburgh.