Fiberart International opens
by Vicky A Clark
Photographed by the artist.

Fiberart International 2019 is up through August 24, 2019 at Brew House Association and Contemporary Craft. 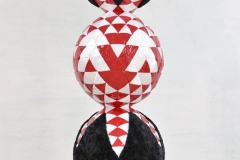 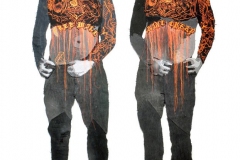 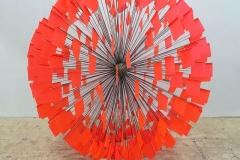 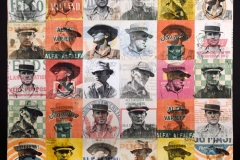 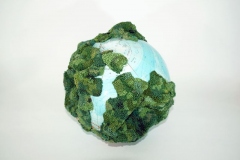 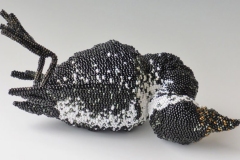 “How did a small group of Pittsburgh housewives practicing the dainty craft of hand embroidery give birth to the rowdy, sophisticated, benchmark triennial we know as ‘Fiberart International?’”

The answer to this rather cheeky question points to a group of dedicated artist volunteers in the Fiberarts Guild of Pittsburgh who have organized a juried international exhibition since 1966 when it started as “Stitchery.” With consummate professionalism, they nurtured and grew the show, stretching the definition of fiber arts, adding a catalogue and travelling it to other venues. But most importantly, they made sure that the work was of the highest standards, reflecting how their chosen medium has broken new ground in what was traditionally seen as a craft medium, helping redefine fiber art and closing what was once a perceived gap between art and craft. Their vibrant show introduces exciting and challenging new work while erasing outdated value judgments. This edition, with 56 works selected from 1441 submissions by jurors Sonya Clark and Jane Sauer, demands attention with large, colorful works; quiet and moving works; and politically charged statements. It reflects our times as the artists express concern for the problems we are facing that range from the environment to identity, consumerism to overpopulation, the personal to the political.

This emphasis on content is more often seen in shows like the “Carnegie International,” where art made with fiber rarely is included. In the latest edition, though, both Beverly Semmes and Ulrike Müller used fiber to investigate identity and abstraction, respectively, revealing that fiber can be used to address current issues as well as any other medium. It was, perhaps, more surprising to see the work of Rosemarie Trockel in 1985 with knit paintings that investigated the repeated use of clichés and symbols such as “Cogito, Ergo Sum” or the brand for playboy. While it is rare to include work made by fiber in mainstream shows, there are major artists using it in their work. Examples include life-size, hollow figures by Magdalena Abakanowicz which were shown in the Three Rivers Arts Festival in Pittsburgh in the 1980s and provocative paintings by Ghada Amer, her sexual content veiled with a curtain of strings. Didi Dunphy retold the history of 20th-century abstraction using fiber techniques, traditionally seen as women’s work, using upholstery, needlepoint, and tie-dye in order to emphasize the importance of women in a history dominated by men, and male artists such as Jim Isermann have created similar work, merging the history of decorative and fine arts.

There, however, still seems to be a divide between artists who choose fiber as their medium and fiber artists who want to be accepted by mainstream contemporary art criteria. Gradually the two camps are coming together, and “Fiberart International” has proven the importance of the medium. There is now more hope that barriers between art and craft are disappearing. “Fiberart International 2019,” in my opinion, eradicates those boundaries entirely as almost all of the pieces communicate ideas about pressing issues. Using a variety of fiber techniques, artists in this exhibition meld their venerable tradition with polemical works that address relevant issues. The excitement and vibrance of the work make this a must-see exhibition.

Even a quick look at the work, on view at the Brewhouse Association and Contemporary Craft, reveals contemporary currents. There is a pussy hat, knit in glass by Carol Milne; a three-part woven piece featuring the words “Gaza,” “scar,” and “camp” by Wendy Weiss; quilts that include an enigmatic image addressing the battle over abortion rights by Dawn Williams Boyd, a weirdly distorted portrait of Barack Obama by Luke Haynes, and a “pixilated” image of two men kissing by Greg Climer. There are other obvious references to the #metoo movement, non-gender specific bathrooms, the environment, identity, recycling and consumerism, immigration and death.

A theme that unites several works is the environment. The fallout from the Exxon Valdez oil spill in 1989 is referenced in Beth Blankenship’s beautifully beaded dead bird that might remind viewers of the eagle shot down at Gettysburg that was part of the “Dig Where We Stand” exhibition in the “International.” Elaine Longtemps addresses the water crisis in Flint, Michigan by using both cotton strips and rope to represent lead in the water, intertwining the physical elements of the disaster with colors that appear in an MRI of the brain when poisoned by lead.

Less specific and more intriguing are two objects by Claire Taylor, “Global Reconstruction” and “After a Long Day, Two Cold Ones.” The first is a dented globe, seemingly repaired by green clumps of embroidery that encroach upon both land and water. Like the globe, our earth has been damaged, but perhaps there is hope for regeneration, a possibility reinforced with her second piece where the central core consists of two crushed aluminum cans with similar creeping growth. These two pieces are wonderful oddities here, and they could easily reside in old-fashioned cabinets of curiosities.

The cans bring attention to consumerism, obsolescence, and waste, ideas that are particularly pertinent to textiles. Mass production of cheap clothes adds immeasurably to our waste problem, and several artists here have chosen to reuse reclaimed fabric. Jim Arendt crafted two male figures out of used denim, a gesture intended to reflect a DIY, making due culture of the working class. Karla Kolb’s quilt includes onesies found in thrift stores and addresses the effect of poverty on children by including statistics and quotes such as “I don’t have a bed. I sleep in a chair,” and Patty Kennedy-Zafred reuses vintage feed bags as the ground upon which she shares articles and photographs of farmers. All three artists bring stories rarely seen in museum settings, answering the call for diversity on all levels.

The recycling of reclaimed fabric reflects a growing materialism but also a personal history as used clothes retain the presence of those who wore them previously. There is an intimacy relating to the body as clothes cover and protect us. Playing with those ideas in a personal piece is Merill Comeau in “Family of Origin” where she de- and reconstructs clothes worn by her mother while Nicole Benner contributes a life-sized figure covered with a copper mesh armor that both protects the body and masks the identity of the figure. The use of reclaimed materials is mined by many contemporary artists such as El Anatsui in his metal curtain that hung on the front façade of the Carnegie Museum of Art in the latest “International.”

These works, along with many others, make this exhibition particularly noteworthy in a way that might surprise many viewers. For way too long, art made with fabric of any kind has been relegated to the margins of art as a craft medium which had traditionally been seen as a subset of the decorative arts which were once called the minor arts, ranked below painting and sculpture. But these categories are breaking down. Architects like Frank Gehry make furniture, Japanese artists like Murakami and Nara make all kinds of ashtrays, action figures, and flip flops, many mass produced, for general use, and as mentioned above, Trockel made “paintings” that were computer-generated knit works. Even Ai Wei Wei has elevated political resistance to an art form. We are in an age when traditional values and categories are breaking down.

One of the long-running arguments has been about the difference between art and craft. The 1960s saw an explosion of handmade useable objects, such as ceramic dinnerware, as a way to resist mass production. Some ceramists increased their scale to compete with minimal art. Fiber arts have had even more to overcome than ceramics or glass because of a long-standing association with women’s work that can done at home, even set aside when “motherly” or “wifely” duties called. The association of knitting, lacemaking, etc., with the feminine and domesticity denigrated both the object and the labor required. The women’s movement, occurring simultaneously with the art and craft debate began to fight that stereotype as artists like Judy Chicago and Faith Ringgold started using women’s work in conceptually driven and large-scale work. Things began to change, but it has been a slow process, and to be honest, fiber still isn’t necessarily accepted by museums and curators.

“Fiberart International 2019” seeks to bridge these artificial categories and boundaries with work that is idea-driven and politically conscious while retaining the technical proficiency always valued in the textile world. Whether the work is small and quiet like a haunting portrait created with burnt holes by Xia Gao or big and bold like Meg Arsenovic’s three-foot colorful wheel created with vinyl marking flags or Max Adrian’s inflatable, the work combines the varied techniques of fiber with current issues. The show finally answers a challenge from 1976 when the invited, male juror refused to pick a show, saying “technique is not enough to carry the craft to the art form.” This exhibition not only provides the best retort, but it also points to a bright future.