Dan Little has wanted to build the infrastructure of the future for a long time. So while he enrolled at Carnegie Mellon University to study architecture, he switched to civil engineering.

“The recession happened and Obama got elected and there were all these promises about infrastructure. I thought, ‘It sounds like civil engineering is going to be the place to be. I want to build high-speed rail, I want to build metro systems around the country.’”

But instead of building high-speed magnetic levitation trains in the Nevada desert, Little founded involveMINT, a service that aims to strengthen communities through time. Specifically, the valuation of time.

“We’re trying to get people involved in the community, so we’re monetizing their volunteer service hours with a new type of currency called the TimeCredit.”

involveMINT piloted the service—connecting volunteers with the organizations who need them—during its December Days of Giving. Over 12 days, more than 300 volunteers worked at events supporting the Greater Pittsburgh Community Food Bank and 412 Food Rescue. For each of the hours they gave, volunteers received one TimeCredit, which could then be redeemed at Black Forge Coffee and Pittsburgh Ice Cream Company, among others.

The participating businesses set the exchange rate for a TimeCredit, offering goods or services of which they have an excess. For example, if a theater participated and found its matinee shows always had 20 extra seats, they could offer one of those spots for a number of time credits.

“Good work in the community should be supported,” Little said. “And a lot of times I think the notion is, ‘Oh, volunteering, you should do that out of the kindness of your heart.’ But in this day and age when people are working three jobs, they don’t have time to care. You have to add some sort of value to make it worth their time. Because time is very valuable.”

Little sat at Work Hard Pittsburgh, a co-working space in the Allentown neighborhood. He was catching on up involveMINT work in between his other two jobs. At the moment, involveMINT operates as a labor of love. It is part of the Hilltop Incubator, an initiative created by New Sun Rising, a local nonprofit which supports innovative solutions to social problems. involveMINT recently established its advisory committee and tech team, which will soon build out an app started in April at Steel City Codefest.

“For the last couple months we’ve been focusing on building the capacity of our organization, and we’re finally at a point where we can [begin our second pilot],” said Little.

That second pilot focuses on the North Side, where involveMINT hopes to work with participants of Ignite Northside. Ignite Northside is an initiative of New Sun Rising and Riverside Center for Innovation, supported by The Buhl Foundation in support of the One Northside Community Plan. The project helps launch or expand businesses through workshops and one-on-one consultations. 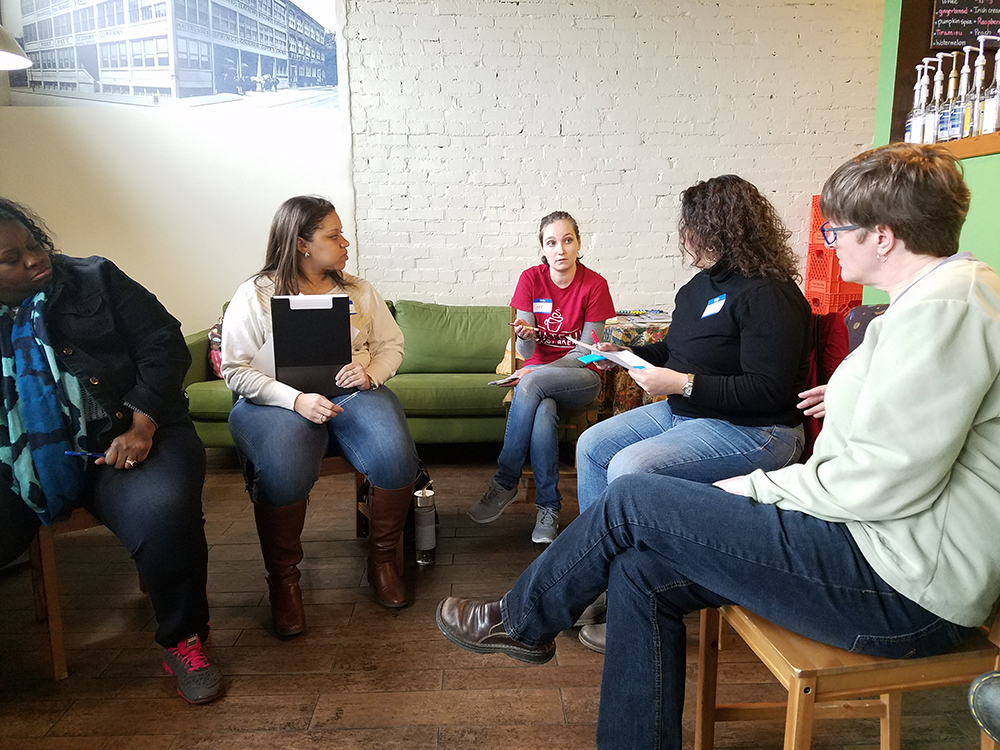 At the beginning of each workshop, participants identify what connections exist in the room, said McQueen-Harris. “The key is building those relationships.”

involveMINT wants to help do just that by offering their service to the North Side businesses and nonprofits participating in Ignite Northside. By focusing their work within one community, Little said he and his team will be able to refine their model, incorporating what they learned during December Days of Giving. Little said redemption of TimeCredits was low; businesses accepting them were spread all over the city, and volunteers weren’t in the habit of patronizing them.

“TimeCredits are a metaphor for relationships. What we learned is the importance of this being a neighborhood thing, to have those relationships already formed.”

involveMINT participated in an Ignite Northside workshop, and is now meeting with community stakeholders and businesses to learn how to be most effective.

“A lot of assets already exist in our community. For organizations that are under-resourced, we’re bringing out more people, so there’s a more diverse skillset that can be used to tackle problems,” said Little. “I hope what this eventually facilitates is that intangible awareness, a sense of purpose and meaning and feeling connected.”

Margaret J. Krauss is a writer and radio producer based in Pittsburgh.