by Jeffery Fraser
Details via rawpixel

The surge in COVID-19 cases continued in December across southwestern Pennsylvania, where all but one county saw infections rise, some dramatically. Still, the region fared better than most in metropolitan America. Meanwhile, new survey data suggests the number of southwestern Pennsylvanians willing to get vaccinated against the virus increased during November, when two drug makers announced their vaccines were highly effective in clinical trials.

Despite a surge in cases this month, Allegheny County had the second fewest infections per capita among the 16 U.S. metro counties tracked by Pittsburgh Today. Only Seattle’s King County had a lower rate.

Davidson County, home to Nashville, and Milwaukee County have been the benchmark regions most gravely impacted, with cases per capita more than twice as high as the rate reported in Allegheny County as of Dec. 15. 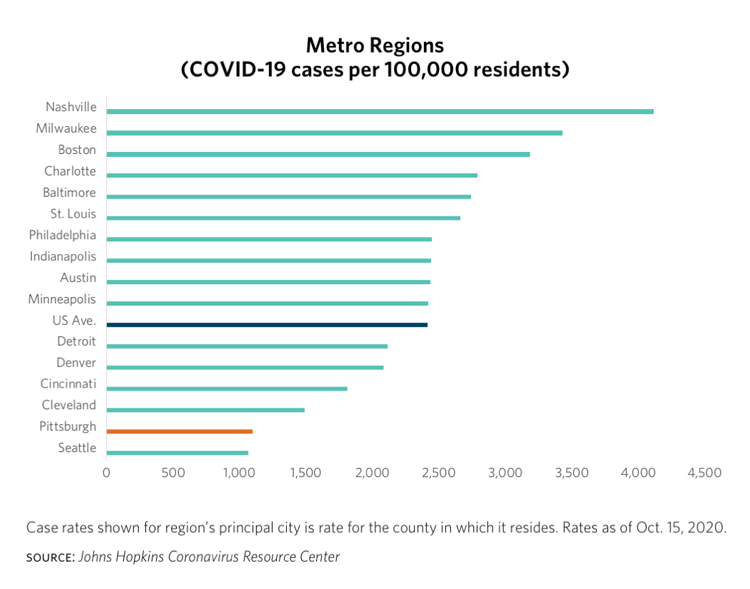 But by Dec. 15, cases in Allegheny County were rising at twice the rate they were increasing across the United States, raising concerns heading into the new year, even as vaccinations begin.

The rates are part of a monthly regional COVID analysis by the Allegheny Conference on Community Development using data reported by the Johns Hopkins University Coronavirus Resource Center, Allegheny County Health Department and the Pennsylvania Department of Health.

Cases rose nearly 85 percent across 10 southwestern Pennsylvania counties over the first two weeks of December—a rate of increase higher than the statewide average. Fayette County saw daily new COVID cases jump by more than 300 percent, the sharpest rise in the region. Lawrence was the only county in the region where the number of coronavirus cases fell over the two weeks. 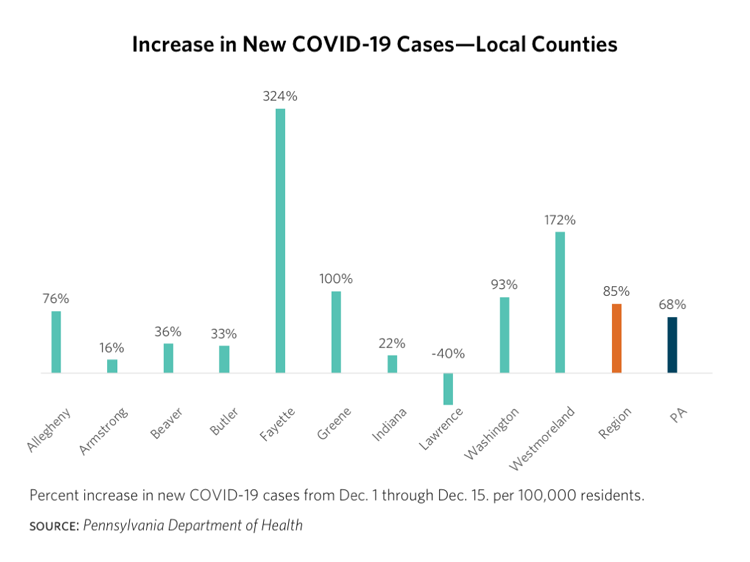 The rate of people testing positive for COVID-19 is another concern in the region, state Department of Health data suggest.

Earlier this year, the Centers for Disease Control and Prevention advised that before restrictions on businesses and social gatherings are loosened, the rate of people confirmed as having COVID should be no more than 10 percent of those tested for at least two weeks.

No southwestern Pennsylvania county met that standard in the first weeks of December.

Most southwestern Pennsylvanians say they heed the advice of public health officials and wear a mask, at least sometimes, to help slow the spread of the coronavirus, according to the findings of a November survey by the Allegheny Conference and Schmidt Market Research.

About one third of people in the region say they wear masks whenever they can. More than half wear a mask only sometimes, most often in a large group or inside a building. Some 13 percent of residents “almost never” wear a mask. 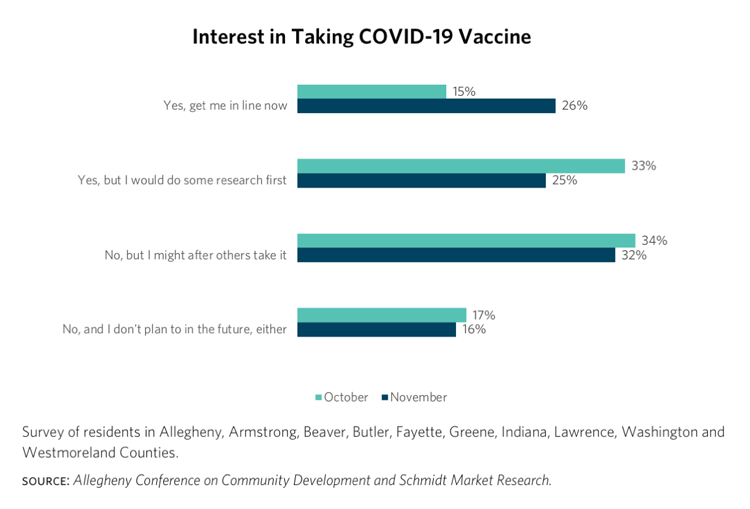 News that preliminary clinical trial findings showed two vaccines to be remarkably effective in preventing COVID-19 was fresh in November, when the survey was conducted. The survey suggests only 26 percent of people in southwestern Pennsylvania were ready to get vaccinated at that time—an increase from October.

More than half of the region’s residents said they needed some time to look into the vaccines or were waiting for more people to take it before making deciding whether to do so themselves. About 16 percent of people in the region say they never plan on getting vaccinated against the virus responsible for the pandemic that has besieged the world for most of the year.