A Rose Tarlow Chinoiserie table holds a collection of antique Delft porcelain beneath a chandelier from Dennis & Leen. Antique Syrian chairs and a J. Robert Scott sofa anchor the seating area. The Swedish grandfather clock is from Jerry Pair, and the draperies and mirror are from Weisshouse.

“I think I’m an old soul,” laughs the owner of the 1920s brick residence that commands a leafy corner lot in Squirrel Hill. She is one of Pittsburgh’s most stylish women, and those who don’t know her may be surprised that behind her trendy exterior lies an appreciation for all things antique, eccentric and whimsical. Still, her flair for fashion is exhibited in the rich textures and subtle colors that form a backdrop for the many collections that fill her home. 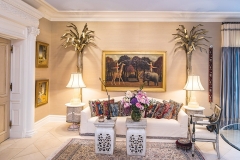 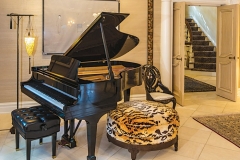 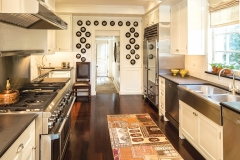 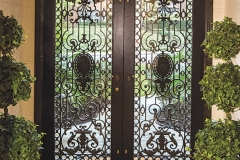 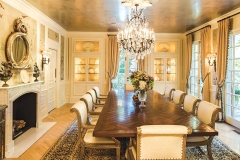 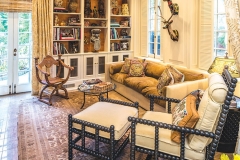 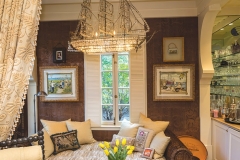 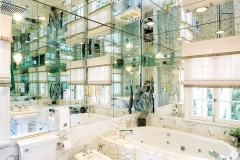 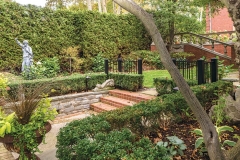 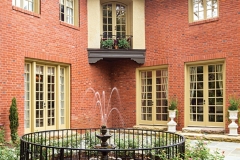 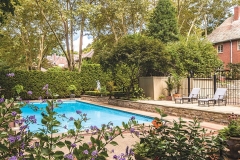 When she was looking for a city residence more than 28 years ago, she knew she wanted “a house that had some character, some age, some bones,” she says. The elegant home that came on the market had that and more, including a large lot with green space for the children, complete with a pool.

The back of the home had been a sloping hill when it was terraced and landscaped by interior designer Louis Talotta for the previous owner. The pool was built in the 1960s, and a formal terrace with a fountain was created in the 1970s. Talotta added French doors in the dining room to match those in the living room, all of which open onto the terrace for easy entertaining. Statuary, stone balustrades and the extensive use of brick and stone walkways gave the grounds an “Italianate” flavor that remains.

With the flow between inside and out already established, the present owner was free to update the home for her family. She chose to respect the numerous architectural details that were either original to the house—including a spectacular pair of bronze entrance doors—or added by Talotta, such as the Doric columns that lead into the living room.

“We re-did all the bathrooms and the kitchen, taking out the back stairs and a side entrance. It had been a staff kitchen, like a galley, so we expanded it a little,” she says. Though still not large, the kitchen is gracious, with an Old-World charm that comes from simple white cabinetry, black slate countertops, dark plank flooring and accents such as a vintage Oriental patchwork runner. Of particular interest is the owner’s collection of English Prattware jar lids from the late 19th century. She credits Jeff Pierce from Toadflax with starting and building her collection—the lids were collectible even at the time and mostly adorned mustard crocks.

The house has changed through the years, and the owner has worked with different designers and sources—the late Marie Navarro, Dana Dodds, Weisshouse, Jim Miller, Jane Roesch, Gil Walsh and Toadflax among them. “I really try to work with and use as many things from Pittsburgh as I can,” she says. Through it all, she has been completely involved, with an unerring sense of what she wants and a vision that has unified the design at every stage of its evolution.

“I wanted the rooms to flow,” she notes. “I wanted them to have an earthy palette. I didn’t necessarily want them to have too much color, except in the dining room, which has hand-painted de Gournay paper. The greens, the blues, the beiges, I wanted everything to be soft, easy to live with.

“I don’t know if it’s my tactile sense, but I’m drawn to texture, the tooled leather on the dining room chairs, the Fortuny fabrics in my bedroom, even the living room sofa had to have an embroidered bead trim.”

There is also a shimmer of light in the rooms that comes from gleaming floors, iridescent silk drapes, subtle silver-leaf Donghia wallpaper on the ceiling, and in the case of the master bath, mirrors on both the ceiling and walls to magical effect. “You learn to avoid looking in certain directions,” she laughs again. Throughout the home there are collections—African crafts and masks in the den, creamware in the dining room, paintings from primitive to contemporary, antique Delft porcelain, antique beaded needlework, tole flowers, mercury art glass and an impressive assortment of items made with seashells.

“I like antique seashell pieces,” the owner admits. “I started collecting them when we began going to Nantucket in the early 1980s. I’ve always been fascinated by the whimsical and romantic nature of them, the sailor’s valentines, the seashell dolls.”

Many of the things she collects have come from Nantucket, New York, the Caribbean or the South Dixie highway strip of antiques shops near Palm Beach, where she bought a pair of metal palm trees because they were “campy” and easier to take care of than the real ones that once graced her living room. And each piece has a story: “The Henry Koerner in the living room I found when I was very young and I went to his house. I loved the painting, but it was too expensive for me. He was nice enough to let me pay it off once a month for over a year.”

Though the den looks as though the owner has been on safari, she’s never been to Africa. She’d love to travel more, but a busy career in the construction business limits her time. For now, assembling objects from around the world that she finds beautiful suffices to fulfill what she terms “major wanderlust.” And her home is very much a trip—through time and across space.